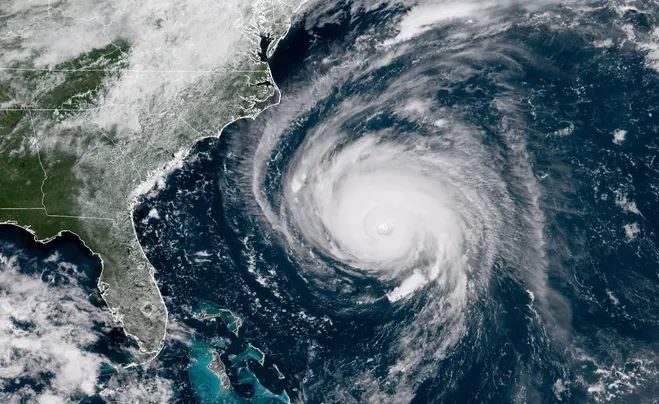 Hurricanes, coastal storms, and Nor’easter are all forms of cyclones. Hurricanes and coastal storms are tropical cyclones that are a rotating and organized system of clouds and thunderstorms that originate in tropical or subtropical waters and have closed low-level circulation.Hurricane season runs from June 1 until November 30th each year. The peak period for named storms runs from around mid-August until late October.

A Nor’easter is a form of a cyclone that forms, typically, along the upper East Coast of the United States and Canada. Nor’easters also rotate counterclockwise. Nor’easters differ from tropical cyclones in that nor’easters are cold-core, low-pressure systems, meaning they thrive on colder temperatures and waters.

The primary damaging forces associated with these types of storms include:

Nor’easters may also include snow and blizzard conditions due to the colder air temps.

Tropical cyclones can develop in the Gulf of Mexico, the Caribbean Sea, the Pacific Ocean, and the Atlantic Oceans. They are born in the moist tropical air.

About every four to five days, a tropical wave of low pressure moves along with westerly winds. In developing tropical cyclones, strong thunderstorms occur. Air pressure drops at the surface of these storms. This low pressure attracts warm moist air from the ocean's surface.

The Coriolis force causes the resulting low-level winds to spiral in a counterclockwise direction around the center of the low in the Northern Hemisphere. Sinking air at the center clears the tropical cyclone of clouds and forms the "eye”, but an eye is not necessary for a tropical cyclone to become a hurricane. Falling surface pressure can occur only if air mass is removed from the circulation center. This is accomplished by wind flowing away from the circulation in the upper atmosphere.

When maximum sustained winds reach or exceed 39 miles per hour, the system is designated a tropical storm, given a name, and is closely monitored by the National Hurricane Center in Miami, Florida.

: Well-constructed frame homes could have damage to roof, shingles, vinyl siding and gutters. Large branches of trees will snap and shallowly rooted trees may be toppled. Extensive damage to power lines and poles likely will result in power outages that could last a few to several days.

: Well-constructed frame homes could sustain major roof and siding damage. Many shallowly rooted trees will be snapped or uprooted and block numerous roads. Near-total power loss is expected with outages that could last from several days to weeks.

: Well-built framed homes may incur major damage or removal of roof decking and gable ends. Many trees will be snapped or uprooted, blocking numerous roads. Electricity and water will be unavailable for several days to weeks after the storm passes

: Well-built framed homes can sustain severe damage with loss of most of the roof structure and/or some exterior walls. Most trees will be snapped or uprooted and power poles downed. Fallen trees and power poles will isolate residential areas. Power outages will last weeks to possibly months. Most of the area will be uninhabitable for weeks or months

: A high percentage of framed homes will be destroyed, with total roof failure and wall collapse. Fallen trees and power poles will isolate residential areas. Power outages will last for weeks to possibly months. Most of the area will be uninhabitable for weeks or months

Summer is the best time to prepare for whatever tropical weather may affect Onslow County, and Emergency Management is urging residents to update their emergency plans and kits before storms strike.

The Atlantic hurricane season runs June 1 through November 30, but most hurricanes strike the East and Gulf Coasts between mid-August and mid-October. Summer is the best time to prepare for whatever tropical weather may affect Onslow County, and Emergency Management is urging residents to update their emergency plans and kits before storms strike.

Tropical storms and hurricanes bring damaging winds, heavy rains, flooding, and even tornadoes. In coastal areas, hurricanes can cause rip currents and storm surges. In the foothills and mountains, these tropical storms can spur dangerous landslides and mudslides. Since hurricanes have impacted every part of North Carolina, it's important for everyone to have a plan in place before a storm threatens Onslow County.

Onslow County Emergency Management urges residents to make a plan and put together an emergency supplies kit to provide the tools needed to survive the storm and recover from it.

Families should have their emergency kit ready to go at all times with enough non-perishable food and bottled water (1 gallon per person per day) to last 3 -7 days. Kits also should include:

Stay informed during severe weather using a battery-powered radio for weather and evacuation information. Know evacuation routes in your community; heed the warnings of state and local officials and evacuate quickly when told to do so.

Be sure to review and update your homeowners' or renters' insurance policies to make sure they include coverage for accidental damage, natural disasters, and, if necessary, flood insurance.

More information on hurricanes and overall emergency preparedness can be found at the Ready.gov website and ReadyNC. Onslow County emergency officials also urge residents to get the free ReadyNC mobile app which provides real-time weather and traffic conditions for all parts of North Carolina.


If a hurricane is likely in your area, you should:

Leave your home or area if you are:

If you are unable to leave, go to the safest room in your house.

Want to learn more about hurricanes and preparedness? Visit these site for additional information: