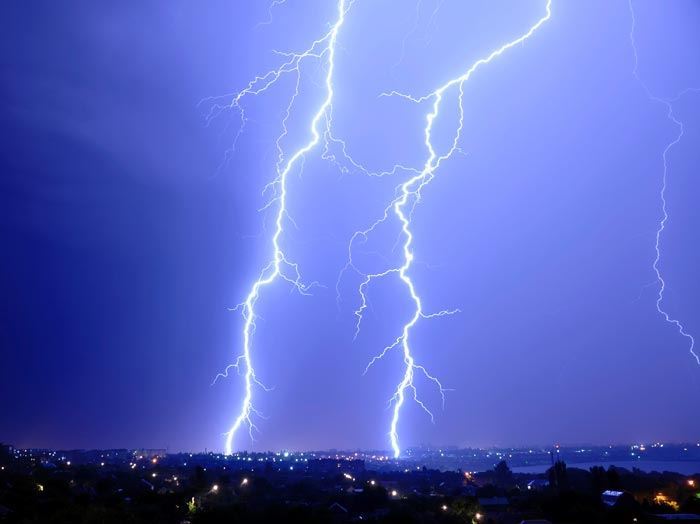 All thunderstorms are dangerous and every thunderstorm produces lightning. The Southeastern United States is very likely to have lightning and thunderstorms, especially in the summertime.

Thunderstorms are the result of convection in the atmosphere. They are typically the by-product of atmospheric instability, where air masses of varying temperatures meet. Rapidly rising warm moist air serves as the engine for thunderstorms.

A typical thunderstorm can be three miles wide at its base, rise to between 40,000 to 60,000 feet in the troposphere, and contain half a million tons of condensed water. Conglomerations of thunderstorms along cold fronts (with squall lines) can extend for hundreds of miles.

Thunderstorms contain tremendous amounts of energy derived from water condensation. According to the National Weather Service, a thunderstorm is classified as severe when it produces one of three elements:

While thunderstorms can occur in all regions of the United States, they are most common in the central and southern states because atmospheric conditions in these regions are most favorable for generating powerful storms.

Hailstorms are a potentially damaging formation of severe thunderstorms. Hail is created when strong rising currents of air within the storm, called updrafts, carry water droplets to a height where they freeze.

Ice particles will continue to grow in size, eventually larger than .75 inches causing them to become too heavy to be supported by the updraft and fall to the ground.

Hail is larger than sleet and will only form inside a thunderstorm. The size of the hailstones is a direct function of the size and severity of the storm.

Before Thunderstorm and Lightning

Familiarize yourself with these terms to help identify a thunderstorm hazard:

Severe Thunderstorm Watch - Tells you when and where severe thunderstorms are likely to occur. Watch the sky and stay tuned to NOAA Weather Radio, commercial radio or television for information.

Severe Thunderstorm Warning - Issued when severe weather has been reported by spotters or indicated by radar. Warnings indicate imminent danger to life and property to those in the path of the storm.

During Thunderstorms or Lightning Storms

If thunderstorm and lightning are occurring in your area, you should:

After a Thunderstorm or Lightning Strike


If lightning strikes you or someone you know, call 9-1-1 for medical help as soon as possible. Check the items listed below when you try to give aid to a victim of lightning:

After the storm passes think to:


Want to learn more about thunderstorms, lightning and hail? Visit these sites to learn about the science behind these systems and how to be prepared:


In any emergency, always listen to the orders given by local emergency management officials.