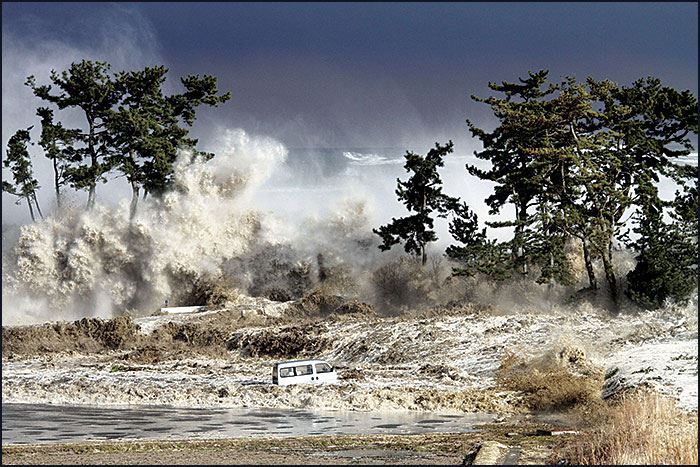 A tsunami is a set of ocean waves caused by any large, abrupt disturbance of the sea surface. If the disturbance is close to the coastline, local tsunamis can demolish coastal communities within minutes. A very large disturbance can cause local devastation and export tsunami destruction thousands of miles away.

Tsunamis have very long wavelengths and periods and can have an average speed of 450 miles per hour. They can travel unnoticed in deep ocean waters sometimes with a wave height of only twelve inches. However, when the waves reach shallower water the wave speed slows and the wave height increases significantly. Some tsunamis can reach 100 feet in height and can cause devastation to a coastline.An indication of an approaching tsunami would be a rapid change in water levels on the coastline. The successive crests and troughs can occur from five to ninety minutes apart. Typically, the first wave is not the biggest one; therefore, it is not safe to return to the area until authorities deem it safe to return.

Tsunamis rank high on the scale of natural disasters. Since 1850 alone, tsunamis have been responsible for the loss of over 420,000 lives and billions of dollars of damage to coastal structures and habitats. Most of these casualties were caused by local tsunamis that occur about once per year somewhere in the world.

Predicting when and where the next tsunami will strike is currently impossible. Once the tsunami is generated, forecasting tsunami arrival and impact is possible through modeling and measurement technologies.

Tsunamis are most commonly formed from earthquakes in marine and coastal areas. Most are produced by large, shallow earthquakes.

Tsunamis are most common in the Pacific region where dense oceanic plates slide under the lighter continental plates. Areas less than fifty feet above sea level and one mile inland would be at the greatest risk of the impact of a tsunami.

While East Coast tsunamis are rare the paper discusses two areas of investigation off off the coasts of North Carolina and Virginia. Fault-like cracks in the outer continental shelf are situated in areas with large deposits of methane hydrate and pressurized water that could create unstable shelf walls leading to an underwater landslide.

There are two types of bulletins to inform an area of the possibility of a tsunami. A Tsunami Watch Bulletin is released following an earthquake of 6.75 or greater and a Tsunami Warning Bulletin is released when information from a tidal station indicates that the characteristics of the sea match those of a destructive tsunami.

Fortunately, 75% of all warnings since 1948 have been false alarms.

The following are things you can do to protect yourself, your family and your property from the effects of a tsunami:

Want to learn more about tsunamis and how to prepare for them? Visit these site for additional information: